So I'm going to need some kind of internet access on the boat, especially since I don't plan to hook up cable for my tv. The marina that I'm in has WiFi and it works decently well, but it's hard to get a signal from inside the boat...
I've searched around and found what I hope to be a perfect solution. It's called a Bullet M2 HP, made by Ubiquiti Networks. I don't know exactly what it is, but if you give it an antenna it can pick up WiFi for miles, apparently.
So, around a hundred bucks later and a week later, I have one of those Bullets, something called a PoE injector, and a foot-long omnidirectional all-weather antenna. Let's go. 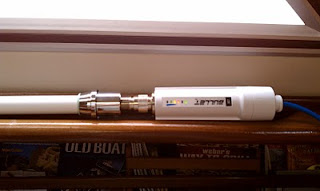 Maybe thirty minutes and a beer later, I've got the antenna attached to the Bullet, the Bullet connected via ethernet to the PoE injector, which is connected to both my laptop and a 12 volt power drop I scavenged from the old chart table lamp (it was blocked by my gps chartplotter anyway). Go internet! 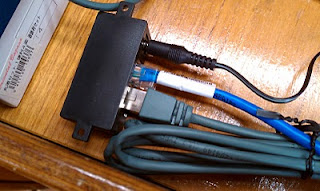 Or not. I thought I would be all set. I didn't electrocute myself, everything looked right, and I had followed the [sparse] instructions that were printed on the bullet's box.. 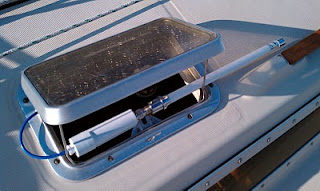