Sailed in my first race yesterday. Nothing too serious, just about five boats in a pretty informal race. 13 miles in and out of the bay, without spinnakers.

We took a late start since we had never raced before and didn't get a chance to practice any starts. I didn't want to jump right into sailing in circles just inches away from the other yachts.

After starting last, we quickly passed the first three yachts and within 30 minutes had left the fourth behind as well. By the time we got halfway through the course, everyone else was so far behind we could barely see them.

We actually lost the lead toward the end due to a horrible tack that brought us dead in the water. One of the guys fumbled and couldn't release the jib sheet, and once he did get it free the other guy wasn't paying attention to haul in the opposite sheet... Fuck!

We spent the last part of the race chasing the other boat down until we made into an area of much lighter wind where we were finally able to pull ahead again. We crossed the finish line with almost an 8 minute lead.

Despite the lack of skill and practice as a crew, we won! We really need to get some practice in before we compete in anything more serious, but for now it's time for some cocktails at the club!
Posted by Heinous at 12:09 PM No comments: 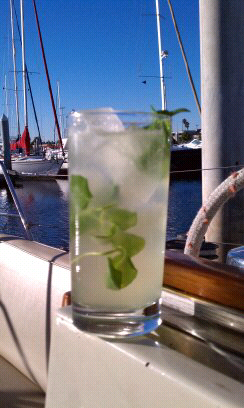 Nothing like an icy mojito on a hot afternoon to kick off happy hour and the weekend.

Posted by Heinous at 4:20 PM No comments: