“Splice the mainbrace” is an order given aboard naval vessels to issue the crew with a drink. Originally an order for one of the most difficult emergency repair jobs aboard a sailing ship, it became a euphemism for authorized celebratory drinking afterward, and then the name of an order to grant the crew an extra ration of rum or grog.
Braces are the lines which control the angle of the yards. On the first rate men-o-war, the mainbrace was the largest and heaviest of all the running rigging; the mainbrace on HMS Victory was 5 inches (13 cm) in diameter.[1] Gunners commonly aimed for the ship's rigging during naval battles, with the mainbrace being the prime target. If the mainbrace was shot away, it was usually necessary to repair it during the engagement; the ship was unmaneuverable without it and would have to stay on the same tack. Even repairing it after the battle was a difficult job; the mainbrace ran through blocks, so it could not be repaired with a short splice or a knot. Splicing in a large run of hemp was strenuous work, and generally the ship's best Able Seamen were chosen to carry out the task under the supervision of the Bosun (Boatswain).[1]
On completion of the task, it was customary for the men to be rewarded with an extra ration of rum. The Bosun would take a sip from the ration of each of the men he had selected for task. Eventually the order "Splice the mainbrace" came to mean that the crew would receive an extra ration of rum, and was issued on special occasions: after victory in battle, the change of a monarch, a royal birth, a royal wedding or an inspection of the fleet.[2] In cases where the whole fleet was to receive the signal, it would be run up with a lift of flags or signaled by semaphore.[3]
Unfortunately, the United States Navy abolished the grog allowance far earlier (after the American Civil War),[4] but the order persisted, allowing the crew to take another drink in place of rum or grog; in 1845 it is recorded as being substituted for the more rowdy "Crossing the Line" ceremony.[5] 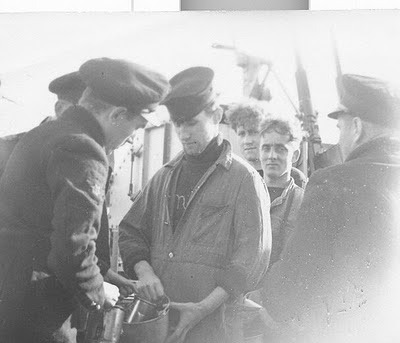 Given that I am and will be doing most of the maintenance and other work myself--especially considering the age of the boat--and that I enjoy breaking out the rum and having a drink as often as possible, I felt "Splicing the Mainbrace," with it's double meaning, suited my purpose perfectly. Plus, it's about as nautical sounding as you can get.
Notes:
1. "Navy Slang". Royal Navy. 2006. http://www.royal-navy.mod.uk/server/show/nav.3804. Retrieved 1
November 2006.
2. "Ceremony and Traditions". Royal Australian Navy.
http://www.navy.gov.au/Ceremony_and_Traditions#Naval_Phrases. Retrieved 5 September 2008.
3. "Visual Signalling In The Royal Australian Navy". Sea Power Centre Australia. 2006-04-08.
http://www.navy.gov.au/Publication:Semaphore_-_Issue_8%2C_2006. Retrieved 5 September
2008.
4. C. L. Veit. "Integration in the US Navy". Naval Landing Party. http://usnlp.org/mixedcru.html. Retrieved 1
November 2006.
5. "Chaplain Walter Colton, USN, on United States frigate Congress, 10 Dec. 1845". Department of the
Navy. http://www.history.navy.mil/faqs/faq92-5.htm. Retrieved 1 November 2006.


Taken from Wikipedia and edited for spelling and length by Chris Haines.