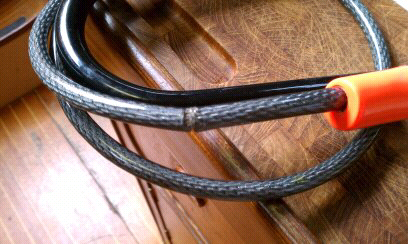 After several weeks of shitty weather and neglect, I decided to take a look at my bicycle. I was riding it to work for a while, which was great, but I switched offices and now it's too far of a ride for me to be bothered with. As such, the bike has been locked up at the marina bicycle rack and exposed to the elements--and apparently thieves.

I took the bike to shop for a tune-up, lube-up, and to check out a rattly headset that I thought I had fixed. As I was returning to the boat with the lock, I noticed that the cable portion had been cut at. Someone had tried to snip through with some bolt cutters or something, but only managed to cut the rubber coating and expose the steel cable. Idiots. All they would have gotten was the front wheel, anyway. I guess that would be useful if you needed a front wheel. They also made off with the cheap headlight that was on the handlebars, so I guess they got something.

So I'm not really out anything but a $20 headlight, but seriously, who does that shit? Get a life.
Posted by Heinous at 5:06 PM