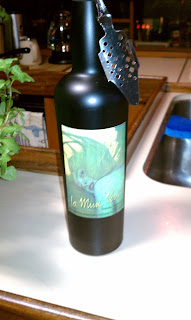 Well, they aren't really new, i just didn't use to make them and now I do. I received a generous gift card for my favorite liquor store and went on a little shopping spree, picking up a few things I don't usually keep onboard. I don't usually keep much in the way of gin onboard, so I decided to throw a couple of gin cocktails into the repertoire. I need to refill the booze case anyway. I decided on the Gibson, which is just a dry martini garnished with cocktail onions instead of olives--those olives are fucking nasty--and a golden gin fizz.

The Gibson I actually really enjoy, and since it's all booze it's very economical for drinking at the bar. I ended up making a royal fizz instead of a golden one (uses the whole egg rather than just the yolk), since I am lazy and I figure the extra protein is good for you. Also, I prefer it with rum, though traditionally it's a gin drink and I'll make it that way if you like. You might be nervous about drinking a raw egg, but if that's the case you probably ought to stick to apple juice or something.

The Old Cuban is basically a variation of the mojito. It's essentially the same thing with a few exceptions: gold rum instead of white, champagne instead of club soda, and a dash of bitters. Everything is fancier when you put champagne in it.

I also grabbed a bottle of absinthe, since you can apparently get the real stuff here in the US now. I've made a few cocktails with it, including one with champagne--fancy!--and they'll get you pretty drunk. You can also drink this in the traditional fashion, which is diluted with a little sugar water, and it will get you pretty drunk that way too. That might be because it's 68% alcohol. Either way, you'll probably be sick before you can consume enough of it to start hallucinating.

I don't have any pictures yet because when I make these, I drink them also, and I never remember to take pictures when I'm drunk.
Posted by Heinous at 5:28 PM