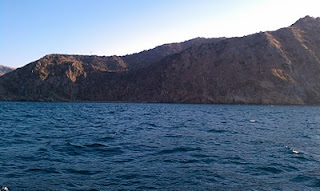 Approaching the island
I have to preface this with the unfortunate fact that the primary camera used to document this trip was stolen or possibly just lost during the adventure, so these are the only remaining images. For certain events here this is probably a good thing, however.

The 2010 Southern California Beneteau Rendezvous was in Two Harbors, Catalina and being a Beneteau owner now of course I was going to go. The plan was to depart at around 5:35 am on Thursday morning, meet the rest of the San Diego boats just outside of Point Loma, and all sail up as a group. As I mentioned, the was the plan...

Also part of the plan, I had a short list of pre-underway tasks to complete Wednesday afternoon/evening. These included loading up on provisions (rum, limes, etc), moving some clothes and other non-essential items and tools that were cluttering the main salon, filling the water tanks, and getting a healthy night of sleep.

What happened instead follows:

Wednesday afternoon
In my excitement to leave work and get started with the trip, I forgot about the limes and left the two dozen I had purchased during lunch in my office fridge. This would not be discovered until Thursday afternoon midway between San Diego and Catalina.

I did have to go to an office function after work. It was a two-hour no-host cocktail social that was conveniently located within a couple of miles of my marina. No problem. I'll hang out for little while, have a couple of drinks, say hello to everyone, and then get home during daylight hours and knock out those pre-underway tasks. This is not what happened.

Instead I had several [read: more than several] drinks, stayed the rest of the evening, got hammered, harassed all the waitresses, got lost, tried to fight a taxi driver, and eventually made it back to boat by around 3:00 am. No problem.

Thursday morning
At 5:15 am I am awakened by Ryan and am informed that it is time to go. Tired, probably still drunk, and not hungover yet (too soon), I hastily make preparations for getting underway. This means I gathered up all the "clutter" mentioned previously, threw them in my dock locker, and threw over all the lines. Let's go. 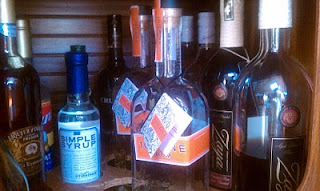 At least I remembered the rum
Already running late, we speed out of the harbor and try to catch up with our flotilla, raising our enormous ten foot Beneteau pennant (twice, since it was upside down the first time). We never catch them, and motor sail by ourselves as we watch them get smaller on the horizon. Of course, Ryan says he had a late night and asks if I can take the first watch while he takes a nap... No problem.
Now, I don't get sea sick, but occasionally get viciously hungover when not allowed time to sleep it off. The first few hours of this trip were pretty miserable. Struggling to stay awake, head pounding, and unable to keep any food or water in my stomach. I eventually turn the watch over to Ryan and try to take a nap. Unable to actually fall asleep, but feeling a little better, I come back up on deck to see how everything is going and notice the engine temp gauge is pegged over. I quickly secure the engine and unfurl the genoa so we can sail for a bit while I investigate.
I open the engine compartment and the steam is billowing out. Looks lie the coolant cap popped off and all the coolant boiled away. Awesome. After it cools a bit I go to refill the coolant and remember that the coolant jug was one of the "clutter" items I removed. No problem, I'll just fill it with water for now. Oh yeah, I was supposed to fill the water tanks before we left. Oops. Luckily, we brought along a case of Dasani bottled water for drinking, and this is now cooling my engine. Right on. 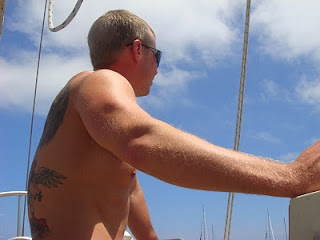 Land Ho!
About 14 hours after we left, partly due to our engine casualty and the fact that whenever the sun broke out we would kill the engine and sail, we arrive in Two Harbors and moor in our assigned spot. Time for a drink! 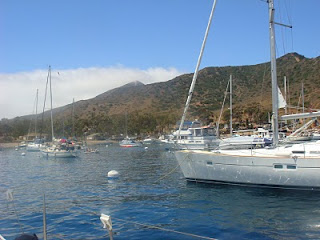 The view from our mooring
I head below to fix a couple of cocktails before we head ashore, and Ryan sets about inflating the dinghy for that very purpose. Halfway into a pair of pina coladas, I hear a loud thump followed by a louder thud. Poking my head out of the companionway I observe the dinghy is in the cockpit halfway inflated, and Ryan is nowhere to be seen... Turns out the dinghy unfolded violently during inflation and knocked Ryan into the lazarette. Maybe we should have closed it after we took the dinghy out. Oh well, stop messing around down there and get the dinghy inflated before the bar closes! 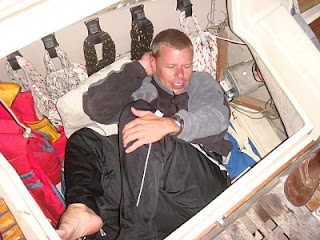 While you're down there, see if you can figure out why the autopilot isn't working
This post has turned out to be a lot longer than I intended, and that was just the voyage up. I guess I'll have to add a part two to this later. 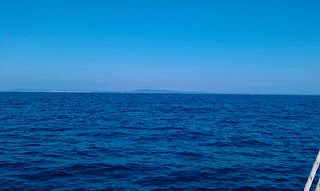 California coastline in the distance
Published with Blogger-droid v1.5.8
Posted by Heinous at 10:32 AM