Well, I managed to acquire a slip just in time to take delivery. It was a bit of a rush because I was stoked and wanted to bring the boat home as soon as possible. Sooner, actually.

I ended up in a marina that was not my first, second, or third choice, but it's in a good location, has decent amenities, gave me a sweet discount, and is very close to an excellent bar (very important). Oh yeah, and they had a liveaboard slip available. (Fun Fact: San Diego only allows 10% of any marina's slips to be liveaboards)

I brought a buddy along to handle lines and we drove down to pick up the boat. The previous owner was there and was understandably pretty sad to see her go as she had owned her for 25 years. The previous owner was also a little concerned with the fact that neither my buddy or I was much of a sailor, but it's my boat now, so let's go. 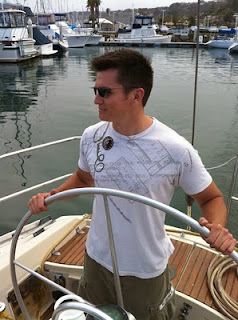 Getting underway was easy and uneventful, i.e., good, and soon we were out in the bay on our way to my new slip. Since we had plenty of time, we decided that we might as well put the sails up and have a go at actually sailing.

We got the sails up, then looked at each other and asked, "Now what?" We weren't going anywhere, the sails were just flapping, and we certainly weren't heeled over and dipping a rail in the water. After a bit of steering around, the sails finally tightened and we started making some headway--just under a knot. Obviously we were doing something wrong, or at least not doing something right, so we eventually brought down the sails and motored the rest of the way home. 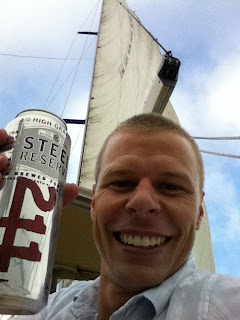 Pulling into my new slip was a little hairy, though. It's accessible enough, being on the end, but it is downwind. I motored past it, turned around, and lined up to enter the slip slowly. Everything is going smoothly until about halfway in we notice that it's getting a little tight. The fenders are getting smashed and by the time we're in there all the way there is about two inches of room on either side of the boat, and we're wedged in tight by the fenders. I'm gonna need a bigger slip...

We'll sort that out later, though, since the boat's definitely not moving and we're still pumped about what awesome sailors we are. Time for a mojito!
Posted by Heinous at 10:40 AM